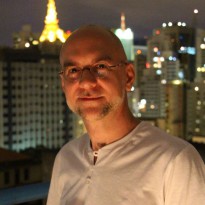 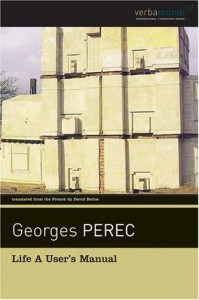 We begin. We turn to the first page, and we find ourselves already placed, not only on location but in the location. We are in one of the public areas. It is not, however, the entrance hall, the first of these areas which would be encountered were we to follow the logic of entering buildings. Then again, the manual has not been written according to this logic. We are not about to take in the entrance hall and make inquiries at the loge de la concièrge on the left. Although we have been placed in a public area, we have been thrown into the context almost randomly. For we find ourselves not in some hallway, nor at the bottom or top of some flight of stairs, nor indeed at any point which - not unlike the space in front of a lift, for example - may be said to afford us a pause during which we might at least be able to contemplate, if only for a few seconds, our surroundings. Of all places, we are on the stairs between the third and fourth storey, and we are climbing.

And as we climb, we might exchange some thoughts, grumbles really, about the old lift being out of order again, about why, after all these years, they have not extended the double layer of carpet beyond the third floor, and of how the single layer now beneath our feet is so worn that the concrete itself appears to be devouring it. Still, we may consider ourselves lucky that we need not - at least, not yet - climb all the way to the attic floors, which have no carpeting at all. This is small solace, however, surrounded as we are by peeling paint of indefinable color, watermarks like soft, moldy cushions, and the beginnings of the smell of our own perspiration which only serves to exaggerate the sense of general uncleanliness. We might, in an effort to conceal our perception of the sweat by way of conversation, remark that the invention of the lift is singularly responsible for the increasingly decrepit state in which we allow stairs to fester. Were we to abolish lifts, we might conjecture, stairs might once again regain their presence in our lives and we, in turn, begin to care for them.

Flights of stairs are echo chambers against whose walls bounce ghostly sounds emanating from life behind walls, partitions and doors. In this respect, this particular flight of stairs is no different from the thousands that wind up the cores of the thousands of buildings of the city. Like them, this flight of stairs is the most variegated part of the building for not only does it suck in all sounds, it is also used by everyone, inhabitants and visitors and removers and funeral directors and doctors and postmen and leashed dogs desperate to relieve themselves alike. All brush against each other at some time along these stairs, exchanging wary greetings or avertive silence. All that makes this building what it is must pass upon the stairs. The stairs are where the building’s biography is written, excepting those personal bits that sully and excite in equal measure. Indeed, it is because all personal bits lie behind the walls that the stairs are the most anonymous and leveling aspect of the building. Here, all conform to the aesthetics of social life, which makes each inhabitant's dwelling all the more attractive to the inhabitant. This is an inauspicious way to begin.

And yet it is not unusual. For this is a manual about life as understood through objects. It is about how we come to know people through the objects they own, or handle, or even through the objects in which they live - for, we must not forget that the building itself is an object; indeed, it is the largest and most evident object inside of which a wide net of life has been cast in order for us to catch the most we can of living. But why begin here, not only on the stairs, but on the stairs between the third and fourth floors? Simply because anything more particular would have made for an obtuse beginning, while anything more logical (remember the entrance hall) would have made for its opposite: blandness.

Similarly, we cannot begin with one more or less significant apartment, or one more or less significant room, or one more or less significant inhabitant, or even one more or less significant object in a particular space inside this building. We must necessarily, and quite simply, begin with one, and allow it to carry us through to the end as its story links with that of another apartment, another room, another inhabitant, and another object, all slowly woven - by three narrative voices: a Descriptor, a Chronicler, and a Fabulator - into a fabric of vengeance, despair and death respectively represented by three unlikely heroes who, at times, appear to reach out of the pages to touch us, with desperate arms outstretched as if from a printed paper grave. Which is why, in one sense, it does not really matter that we begin on the stairs, between the third and fourth storeys. But it is also why, in another sense, beginning here, in a public space, is better than beginning in some attic room. For at least in the public space, much like when observing a man's bookshelf before choosing to focus on one of his books, we begin with some perspective without risking blunt focus on some darkened damp corner of some forgotten room which has only a marginal part to play in the life of the building, and so in the manual of life. The entrance hall would have been too central: it would have haunted our entire reading with its seeming centrality. Indeed, we will not encounter it until we are over a fifth of the way through the manual, and then only once again, very nearly toward the end. What is needed is some space that is public, and yet removed, but not too removed like a basement (which we will visit even later than the entrance hall, and which, in sharp contrast to the latter, will be visited a total of five times). The space should form some visible part of the building, it should obviously be involved in the daily life of the inhabitants, and (why not?) we can even choose a central point inside this space, such as a location between the third and fourth storeys in what is a six-storey building (with an additional two storeys of attic floors). Yes, beginning on these stairs makes a great deal of sense after all. If we have been thrown into the context, we have been thrown not altogether randomly. It is the first sign that we can trust this manual. It has something to say. It is up to us to decipher it.